It wasn't until recent years that I became a 'dog person.' My mom let us have cats while growing up and eventually bought my younger brother a black lab puppy. Her name was Allie and she was an outside dog. She was well-loved and well-taken care of, but the whole 'dog thing' wasn't for me.

The 'dog thing' wasn't for me until closer to the end of Allie's life. I always loved her from afar, but wasn't too receptive of wet kisses, fur, and that dog smell.

As she got older, her health worsened. Eventually, it was up to my mom and me to bring her to our camp at Toledo Bend one last time. She LOVED that place and ran around like she did when she was a puppy.

My brother couldn't go with us because of school, so the task was on us. She had fun and I realized exactly how much I had missed out over the course of her life. Shortly thereafter, the time came to put her down. My brother handled it like a champ and our family was missing a member.

Since her crossing of the rainbow bridge, my ex, Jeremiah, and I have rekindled and gotten back together. I pretty much immediately moved back in.

Neither of us want children, but we did feel as though something was missing. I began to look at the dogs and puppies posted at our local shelter as I'm a fan of 'shop, don't adopt.'

I looked, showed him pictures, we discussed which dogs and puppies we liked, and finally, I decided to make a visit. The male pit bull puppy that I had REALLY wanted was adopted 10 minutes before I walked in.

The ladies at the Lafayette Animal Shelter & Care Center were kind enough to allow me to meet the adult dogs and then the other puppies. Jeremiah and I had seen a hound-type female that we talked a little about but never decided on. This female was the first puppy I met.

I told the lady I'd take her before Jeremiah ever met her. Then came the anxiety about what I had just done.

Not one to back out, I attempted to get him on the phone--no answer.

The shelter held this dog, Olivia, for me while I drove to his gun shop. The entire time driving, I was describing this sweet, scared, pup. I could tell that he was definitely intrigued and then I told him we were probably going to get her.

Once we arrived, we waited.

He became impatient, the shelter was about to close, and we still had another errand to do before end of day.

They start filling out paperwork and bring Olivia to the front. We had already decided she was getting a new name, and after a quick discussion, we decided on Remi--short for Remington.

We got Remi loaded into the truck, did our errand, and went to Dave's Gun Shop. That shop is Jeremiah's other baby and we figured that was as good of a place as any to start socializing the three-month old pup.

She transformed from a scared, timid, shy puppy to one that was full of life and love, with quite a ferocious bark. She happily greeted employees and customers with her silly puppy ways, all while making sure I was right behind her.

Leaving the shop, I went by Petco for supplies. I haven't been to that store in years, didn't know where anything was, and was quite frazzled with people wanting to play with Remi, the fact that Remi is such a puppy, and not being entirely sure what I needed.

I made it through the trip and was able to get home with only minor hiccups along the way. The trick to Remi, and I'm sure any puppy, is to occupy them while attending to other things--in this case, placing her in a harness.

She had one or two accidents the first night, snuggled with us on the couch, and then was able to sleep with us in bed. That pup slept the entire night and had no accidents!

We took her out the next morning to potty and began working with her on commands like, 'sit,' and inside. Later that evening, we went back by Petco for a kennel, bedding, and a few other items.

By the way, if you're in the Lafayette (LA) area and have a pet, that's the place to go. The employees are so sweet, helpful, and understanding of Remi's puppy ways.

We took her to Dave's again so Jeremiah could complete a few tasks and I spent the time getting puppy snuggles.

I'm converted. I'm now THAT person. That dog person. I get it, now.

Anyway, we get home, set the kennel up, take her for a long walk and tell her, 'kennel.' She happily runs in and promptly goes to sleep--for the whole night!

Sunday morning, I wake up at 6 to take her to potty, Jeremiah takes her again around 9, and we have a lazy morning of gathering items to bring to his mom's.

His mom lives about 2 hours away, so again, the thought process was, 'let's get her used to the truck now.' One potty break and lots of treats made the drive pretty easy.

Once we'd arrived, she met another 6 or so people, 3 other dogs, and was able to see very non-aggressive geese. Previously, she had tried to chase the ducks in our neighborhood but had no interest in the geese or chickens.

After a long (but wonderful) day, we made it back to Lafayette. The final stop was at a friend of Jeremiah's. I didn't think we'd be long, but I took Remi out of the truck to let her stretch (and potty.)

His friend's wife came outside to invite us in and was warm and receptive toward our pup. After a few minutes, Remi was basically best friends with their dog and ended up in a wild game of chase.

We are finally home and Remi is sleeping soundly in her kennel after an exciting day. This puppy mom couldn't be any prouder of how well she handled herself and the amount of learning that has taken place!

Tl;dr: Got a shelter puppy, she has learned 'sit,' and made one other doggo friend after meeting a total of 4 canines. We are very much in love with our puppy, and are finding things work well if we just go for them. 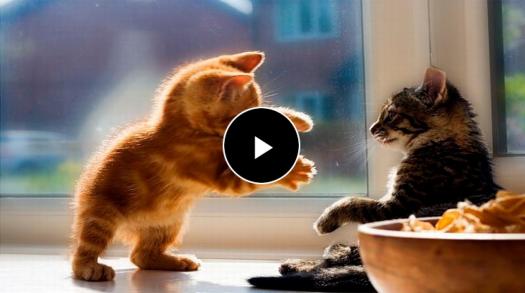 Our Quirky Cats: The Joy of Watching the Curious Feline

Why are we obsessed with cat videos and their antics?