The team comes back together to face a threat they created

It feels good to be back to the movie side of things. I love the TV shows and how the story gets to develop over time, but I can do these movies in one sitting. And this was a big one. The direct sequel to 2012’s The Avengers, this film reunited the heroes and put Joss Whedon back in the director’s chair. The highly anticipated film grossed $1.405 billion at the box office, putting it in the top ten all time. However, it is a divisive movie with several glaring issues that holds it back from being something special.

I think the biggest problem Avengers: Age of Ultron suffers from is the influx of new characters. It’s a difficult task to juggle all these major heroes in one movie. They made it work in the first installment and gave us a fun forum for Loki to do his thing. Here, they attempted to have all the usual folks, yet throw in a pair of twins (Quicksilver and Scarlet Witch) and a near God like hero, Vision. On their own, they’re fine characters. But, it’s hard to care about them with so much going on. Scarlet Witch doesn’t get interesting until later films, while Vision is kind of bland. Quicksilver had potential and some fun scenes with Hawkeye, but his powers are barely used. Watch X-Men: Days of Future Past or X-Men: Apocalypse to see them come up with creative uses for Quicksilver. Instead, he’s kind of wasted here and while his death is ultimately a shock, it doesn’t carry much weight because audiences didn’t get to connect with him. 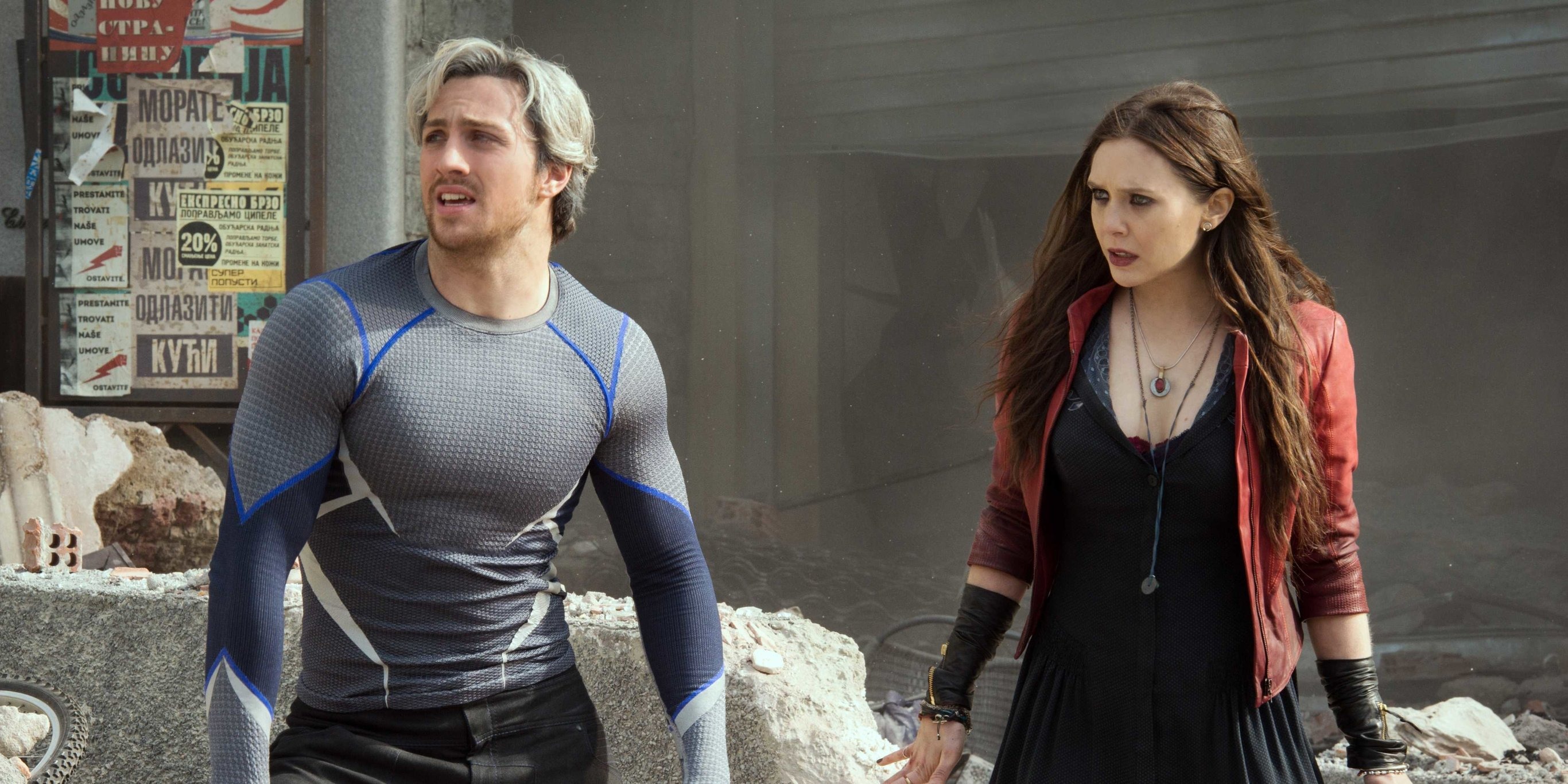 Speaking of Hawkeye, he was easily the highlight of this movie. Hawkeye is sometimes the brunt of jokes because he’s not a super powered hero. They played into that with plenty of nods to the team joking about how much they needed him. And we got a lot of foreshadowing that he was going to be the one to die in this movie. We were introduced to his secret family and a few mentions were made to the idea of his mortality. So, when Quicksilver died instead, it was an interesting twist. But, this part is about Hawkeye. Jeremy Renner got a ton to work with this time around and felt like the star of this thing. The best part was probably his conversation with Scarlet Witch to get prepared for battle. “The city is flying, we’re fighting an army of robots, and I have a bow and arrow. None of this makes sense.” 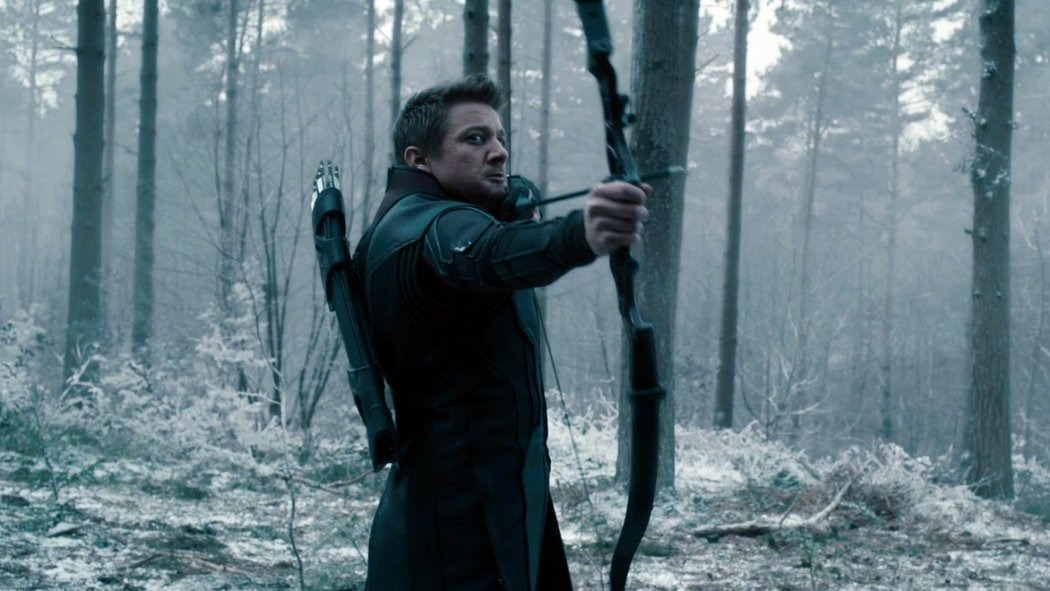 From the great Hawkeye stuff, we reach the character who got the rawest deal in this movie. Thor. Granted, the first two movies starring him weren’t anything special. Thor: The Dark World gave him very little to work with. Avengers: Age of Ultron gave him even less. He does next to nothing. At one point, he literally leaves the main conflict to go goof off topless in a cave. That was one of the worst scenes because all it felt like it did was act as a commercial for the next Avengers movie by talking about Infinity Stones. It was ultimately a waste of a great character. Thankfully, Thor gets his due in his next movie, but that won’t be for a long time in this series. 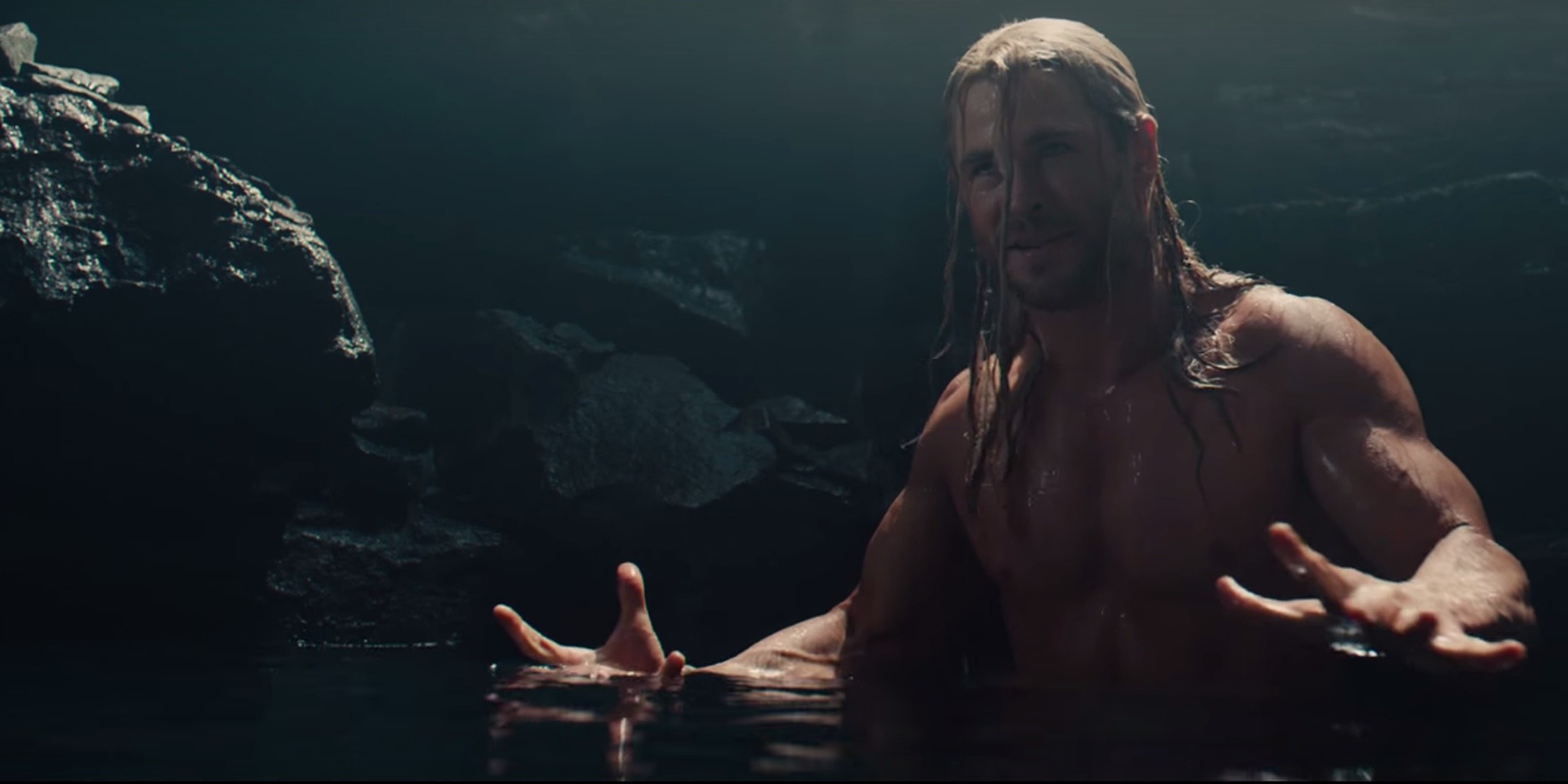 Bruce Banner is another character who kind of got the shaft this go around. On the one hand, the big Hulkbuster fight against Iron Man is a fantastic battle. They wreck several blocks of a city and it lives up the hype we all had for it when the trail first arrived. Other than that scene, Banner and the Hulk are both mishandled. There are Hulk inconsistencies all around. Near the end of the film, Hulk commandeers a quinjet and chooses to leave. That’s a conscience decision that doesn’t seem like something he should be able to do based on what we’ve seen from him before. Of course, the biggest issue around Banner is the romance with Natasha. Scarlett Johnasson has shown chemistry with Chris Evans in the past. She doesn’t share it with Mark Ruffalo and their scenes never clicked. It doesn’t help that it feels like the relationship comes from out of nowhere, it gets forced down the viewer’s throats, and none of the content is compelling. In fact, I found each scene where they flirt or discuss their relationship to be a major drag.

There are some serious pacing issues. It mainly comes after the aforementioned Hulkbuster fight. The team goes into hiding at Hawkeye’s secret family farm and kind of just kill time there. Ultron is out killing folks and they do nothing. When they decide to leave the ranch, they just go back home like nothing happened. Why were there in the first place then? I usually find Joss Whedon’s work great, but he made some strange decisions in this sequel. From the cheesy moment where Banner falls into Natasha’s cleavage to the weird rewind effect used on Scarlet Witch to the awkward title drop, a few things just come across awkwardly. 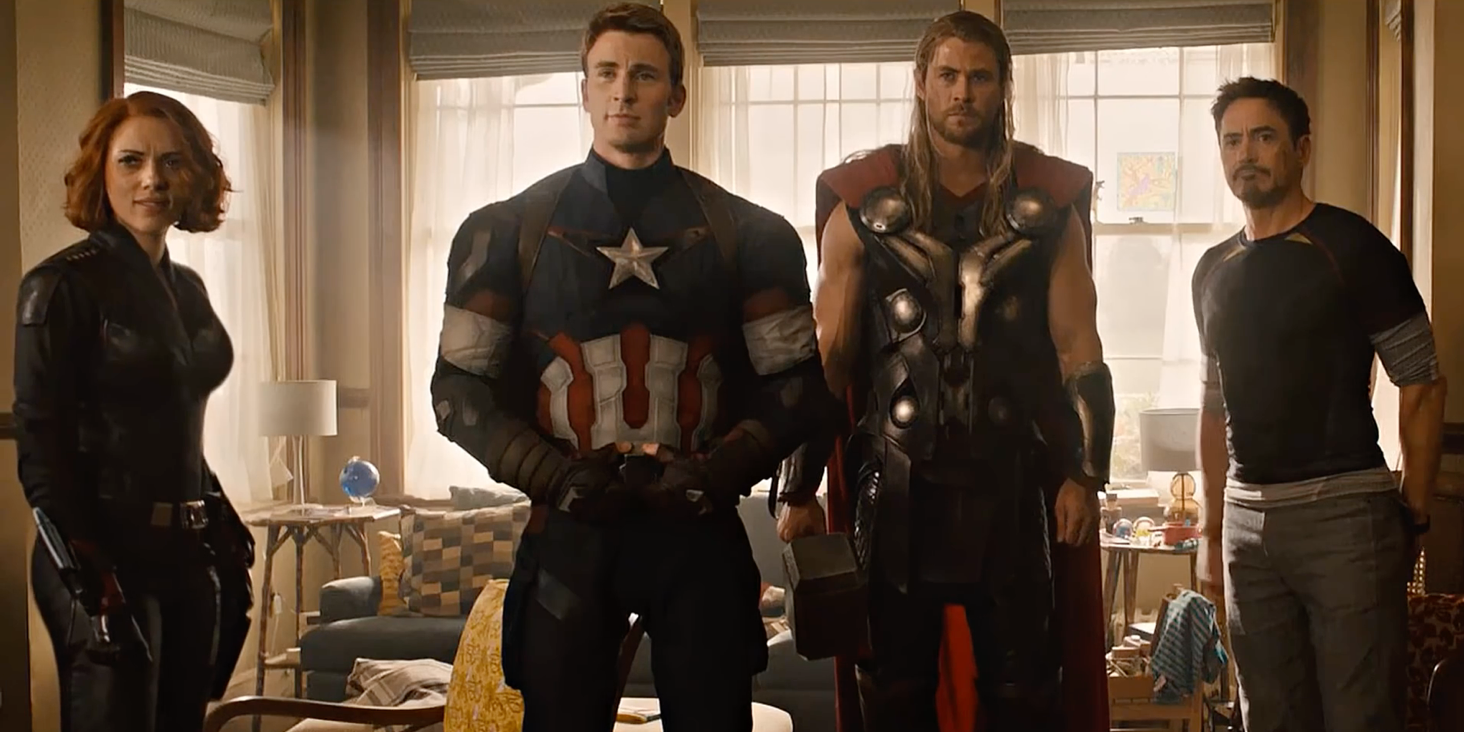 I don’t want to seem too negative here. Though there are issues, there’s a fair amount to like. The opening fight scene where they retrieve the scepter uses each character very well. The real treat is the party scene where they celebrate getting that scepter. Honestly, the cast members have such strong chemistry and get their roles so well that I could watch an entire movie of them just hanging out. Watching them all attempt to lift Mjolnir was a delight. I do wish Steve Rogers got to lift it, though. He’s the ultimate good guy and a more worthy subject than Thor, to be honest. Plus, he wielded it in the comics in the past.

Ultron is an interesting villain to look into. On the one hand, the concept behind him is one that could prove truly threatening to the team. However, he never really seems to come across as one. The fact that he gets help from the powerful twins and still doesn’t put a real dent into the Avengers is telling. James Spader is exceptionally great as the voice and injects his personality into the role. I know some have complained about Ultron being too jokey, but I think it makes sense because he was partially created from Tony Stark’s mind. Lastly, I feel his plan was inconsistent. He wants to make the Avengers extinct, yet when he kidnaps Black Widow, he just puts her in a flimsy cage. Then, he leaves her so unguarded that Bruce Banner can save her without even turning into the Hulk. It doesn’t make sense. 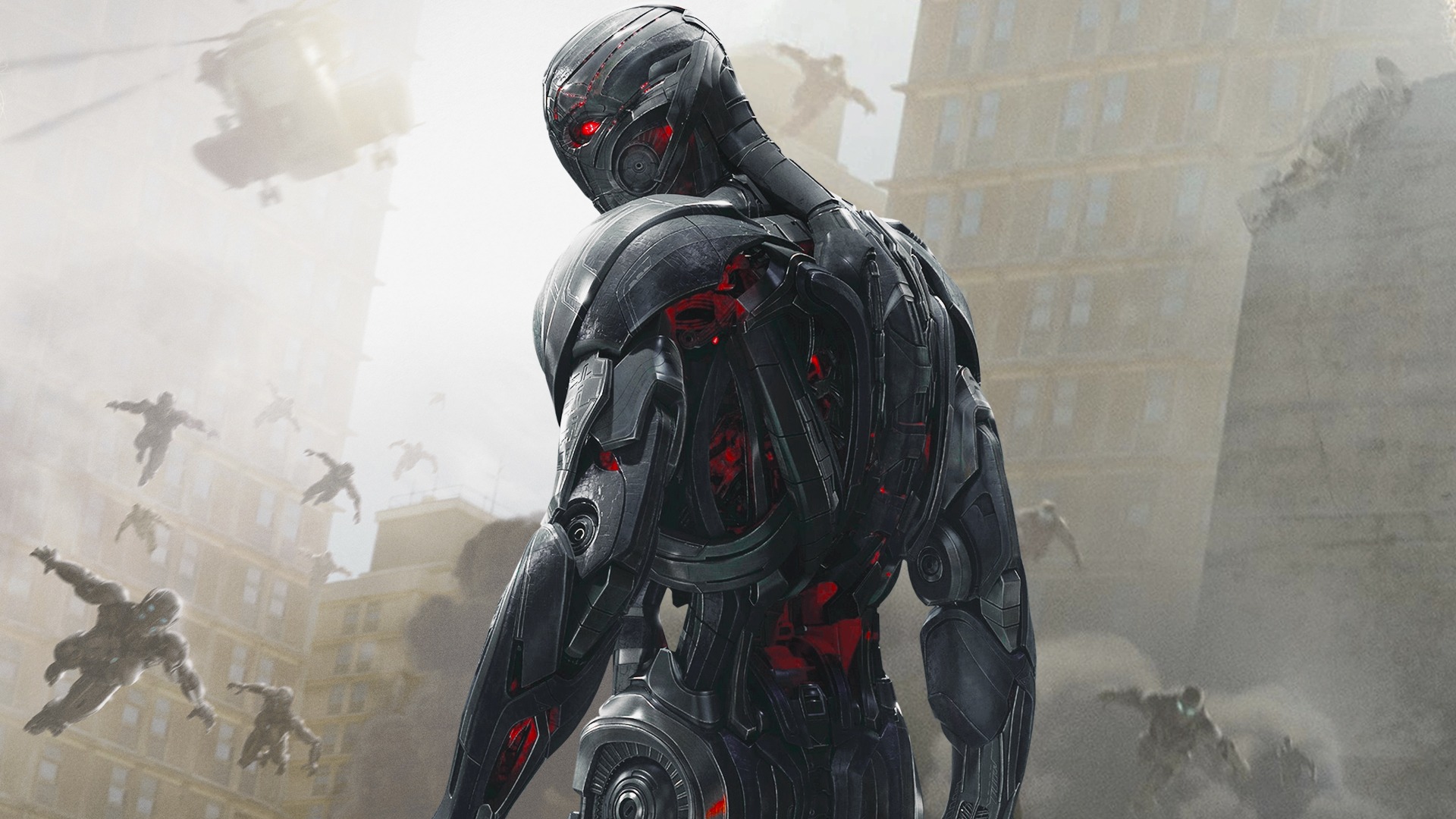 I wrote more than I expected, but it’s time to wrap up by mentioning the connections this has to the MCU. Honestly, it’s arguably the most important setup in the entire MCU. Introducing the new characters is key because two of them (Vision and Wanda) play a major role going forward. We get a ton of talk about the Infinity Stones and the appearance of the Mind Stone as it gets used to create Vision. The events of The Avengers causes Tony to act out of fear and create Ultron. This sets in motion what happens in Sokovia, which ultimately creates the conflict in Captain America: Civil War. Furthermore, there’s the appearance of Ulysses Klaue who is a key character in Black Panther, and we have the mention of Wakanda. To end it all, the post-credits scene showed Thanos for the final time before Avengers: Infinity War. He gets the Infinity Gauntlet and says that he’ll do it himself. It’s an odd thing to say because it’s not like he was the one who sent Ultron out there to get the Mind Stone. In fact, Thanos had it because it was he who gave Loki the scepter in the first place. Regardless, Thanos was on his way and things were about to get serious.

After all that, the end result was a mixed bag of a movie. There were strong points all over, but it got bogged down by some major issues. The biggest being that they seemed to try and accomplish way too many things, yet it doesn’t end up feeling like a ton actually happened. A good, but far from great entry into the MCU.