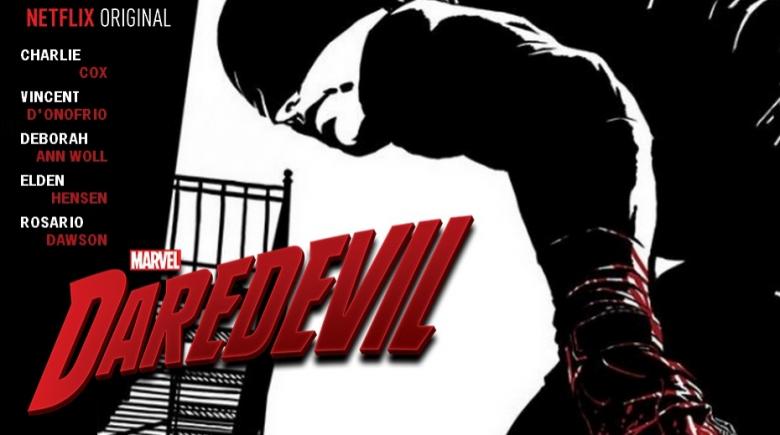 We’ve officially reached the point of the Marvel Cinematic Universe where Netflix gets involved. Daredevil was the first MCU show exclusive to the streaming platform. It featured 13 episodes and looked to get the hero back on track after the disappointing Ben Affleck led film in 2003. It also had to succeed if the rest of the Netflix heroes could get an opportunity, similar to the way Iron Man had to work for the rest of the MCU to come together.

Honestly, with all that pressure on this show, Daredevil still managed to knock it out of the park. There are plenty of reasons for that, which I’ll lay out. However, it all starts with Charlie Cox. He plays a great Matt Murdock. He’s given a lot to work with and nails it each time. Murdock is a complex character. He’s not just a blind ass kicker. His backstory is explained in interesting fashion, but it’s the current struggle he deals with that is most gripping. He doesn’t kill people, but is okay with leaving them to die and admits he enjoys the violence that comes with what he does. Throw in some of the surprisingly strong religious talk with his priest and you’ve got a complicated protagonist. 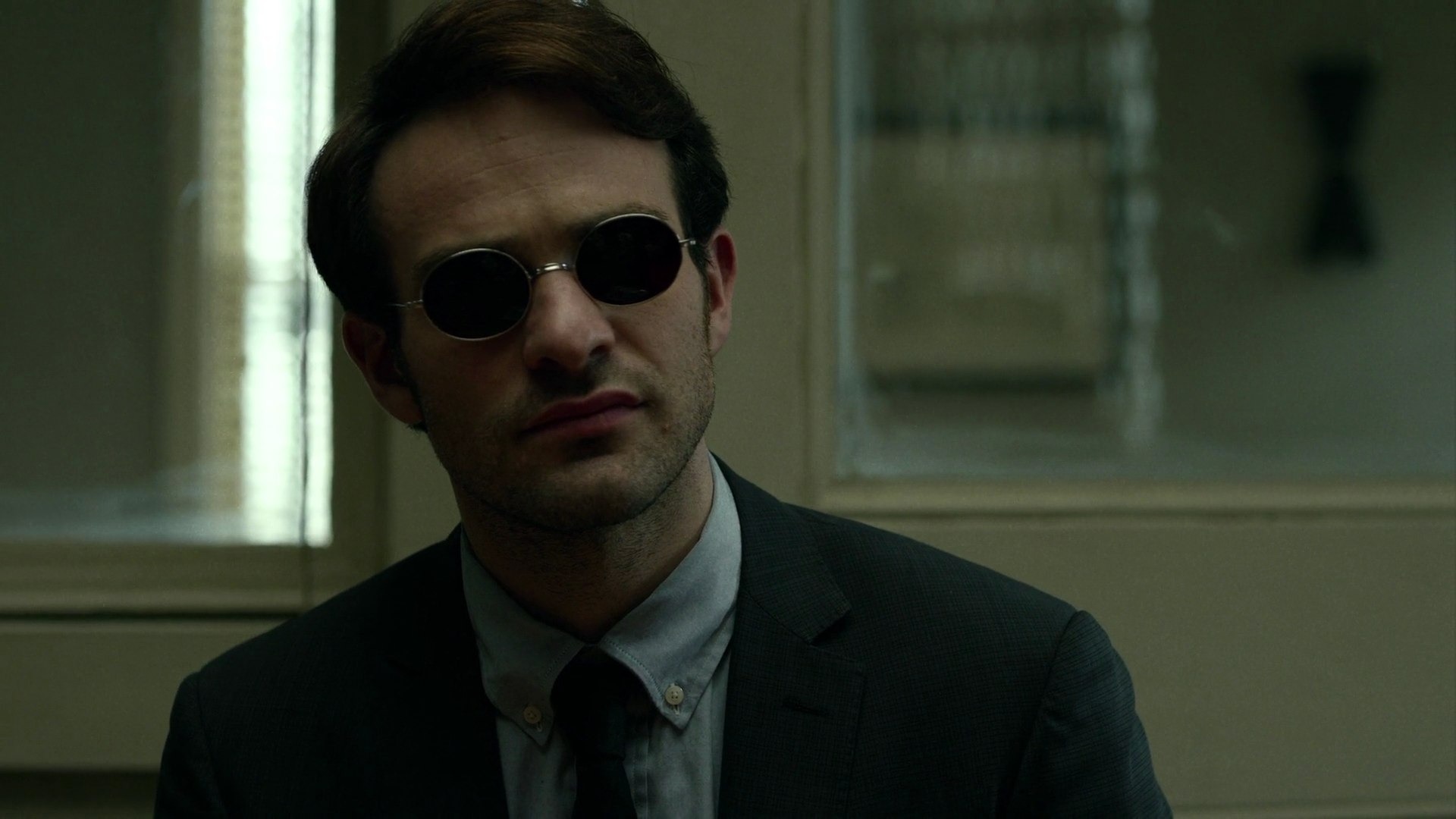 Of course, a great good guy needs an equally compelling villain. Daredevil doesn’t just have a great antagonist. It has the best one in the MCU so far. Wilson Fisk is incredible. Vincent D’Onofrio is outstanding in the role. He gets all the mannerisms right and carries himself with a demeanor that is chilling. He speaks softly, yet is commanding. I love how he’s the opposite of Matt, yet similar. They both love their city and want to make it better, but Fisk wants to do so in a ruthless manner. The show did a wonderful job in introducing him. Before we ever see him do anything criminal or face off against the hero, he’s wooing Vanessa. It allows us to get invested in him. He’s an isolated guy and we learn a lot about his relationships through flashbacks. His history perfectly shapes why he lashes out when things happen to Vanessa or to his friend Wesley. There was also the fact that he felt dangerous and like a true threat to the hero. He's magnificent. 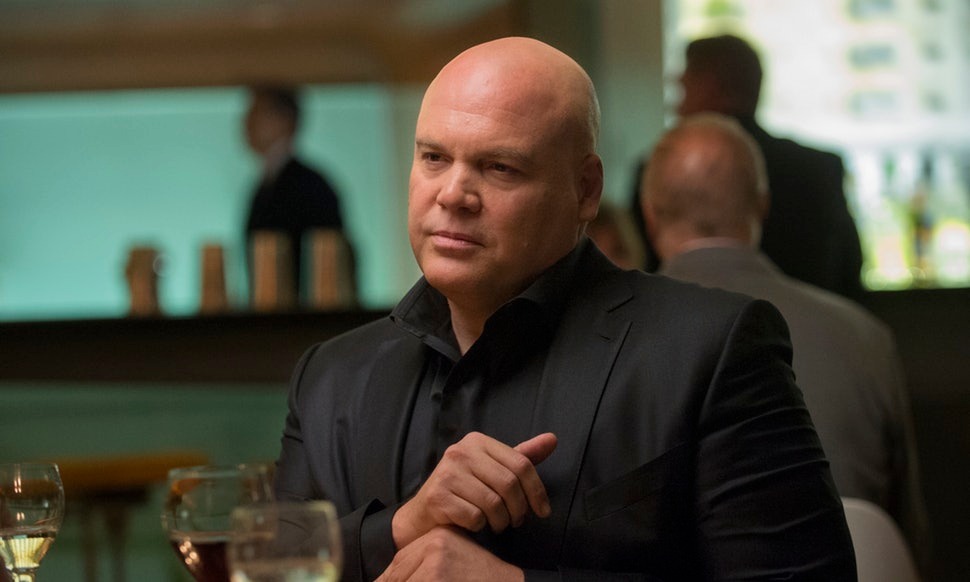 Another positive for this show was the supporting characters. When talking about these members of a series, I point to Showtime’s Dexter. That was mostly a great show, but it had one glaring issue. The supporting characters were useless. If the story didn’t involve Dexter or Debra, most viewers didn’t care. Thankfully, Daredevil was great in that department. Elden Henson was delightful as Foggy Nelson. His scenes with Cox were great and they had a natural chemistry. Deborah Ann Woll (Karen Page) was the best she’s ever been and the character was a strong one. She goes off on her own side adventure and it never feels boring. Though they’re the main two supporting characters, I also really enjoyed Ben Urich and Claire Temple. The show is loaded with well developed characters. 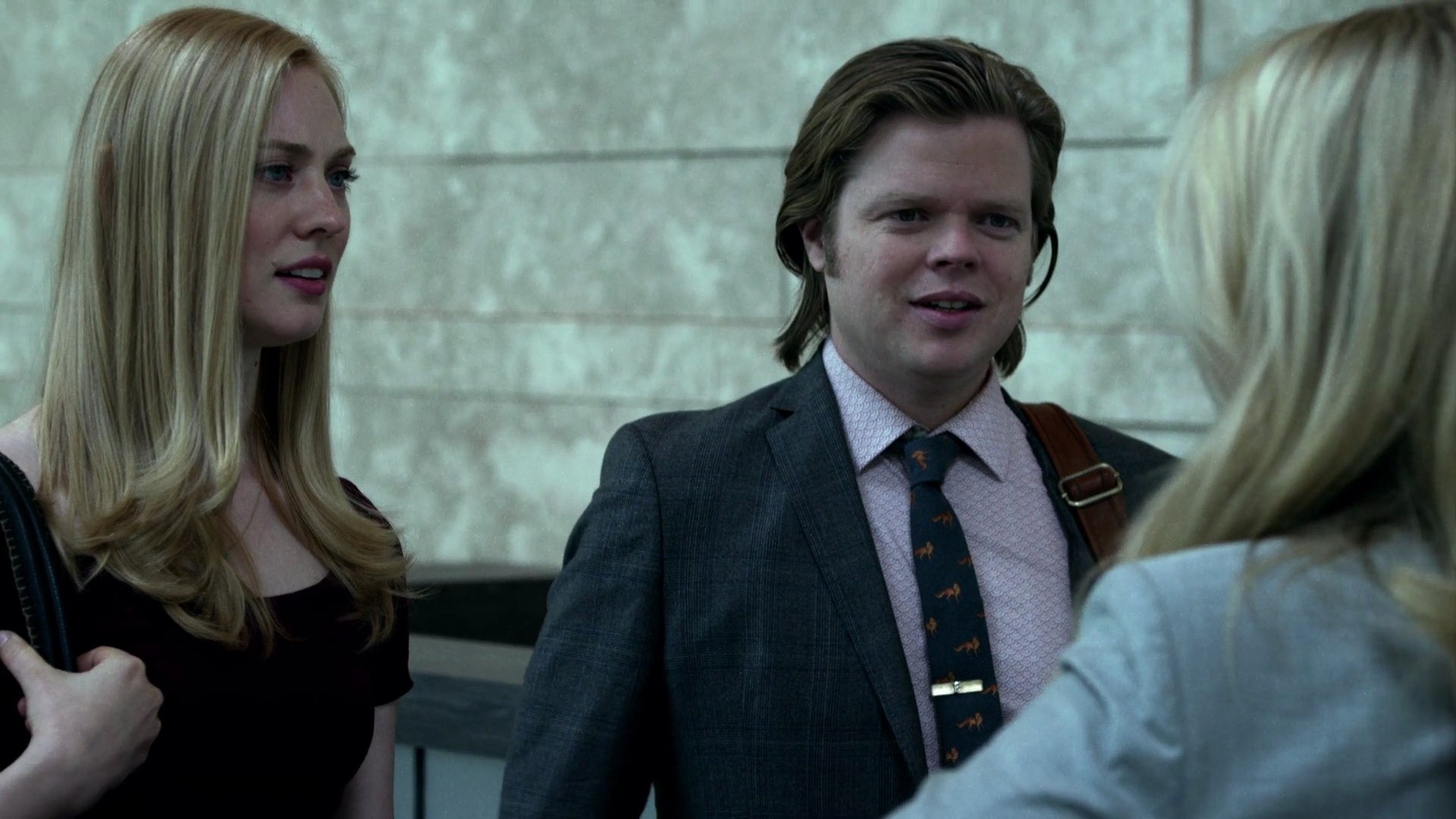 Speaking of Claire, while I did enjoy her being on the show, there were a few things that were kind of weird. For one, she was a major focus of the first handful of episodes, yet disappeared in the back half of the show. I understand that she wasn’t needed, but it was still a jarring change. The other oddness came from her romance with Matt. An attraction is understandable. However, within just a few episodes, she’s confessing that she could be falling in love with him and that was too far fetched for me. When Fisk and Vanessa declared their love for each other, it felt earned. Not with these two, though.

With character stuff out of the way, it’s time to look at the other aspects of the show. The first thing I want to commend is the gritty style. Similar to the way Guardians of the Galaxy felt like nothing else in the MCU, this show benefitted from a change of pace. It was darker, more grounded, and violent. There’s a scene where Fisk murders a man by slamming a car door into him with incredible force over and over. It’s something different and different is good. The fight scenes were almost all great. It wasn’t the fun comic book style we've become accustomed to, either. Each hit looks and sounds vicious. You can almost feel them. Matt takes as much of a beating as he dishes out and it gives him a vulnerability that is missing from other heroes. Of course, some mention has to go to the unbelievable hallway fight scene in episode two. If you haven’t seen it, go out and do so. It’s a three minute, single shot fight that might be the best in the MCU so far. 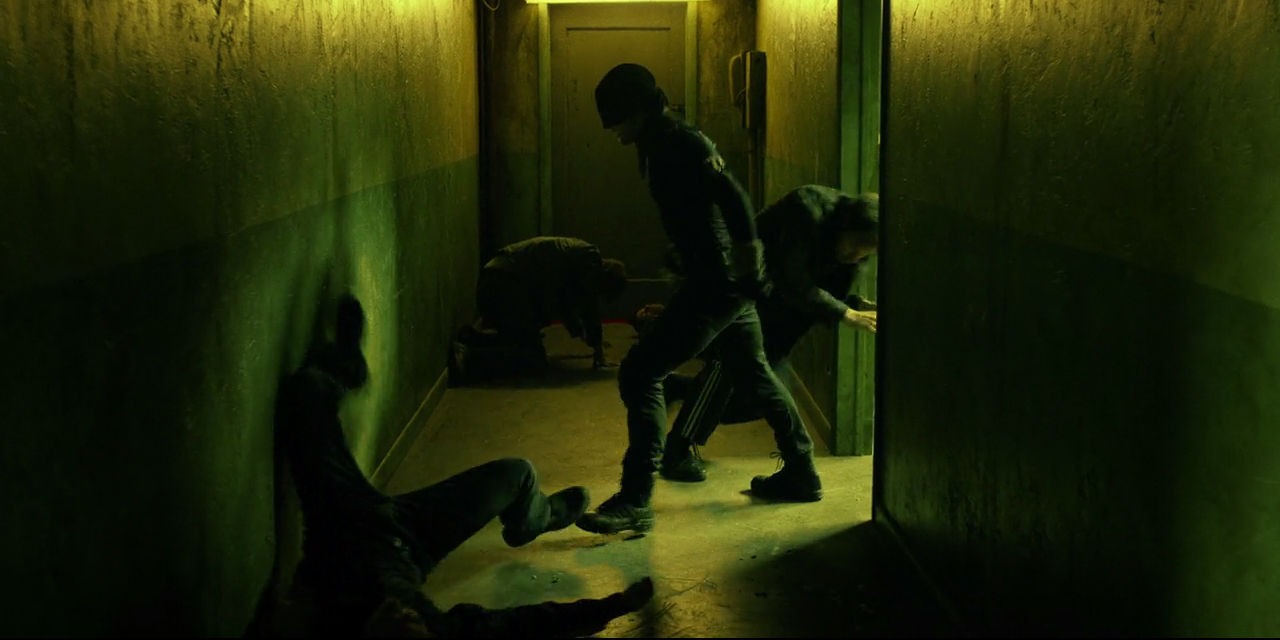 It was interesting to see how they strayed from giving us the famous Daredevil costume for most of the season. To be fair, it does look kind of funny and is hard to take serious at times. Even when we do finally get it, Foggy makes a joke about how the horns are too much. I get it. I liked Matt’s basic outfit he used for most of the season. The all black color worked for the dark scenes, fit the tone, and looked cool. They waited until the finale and the big fight with Fisk to give us the suit and it looked cool. Certainly worth the wait. 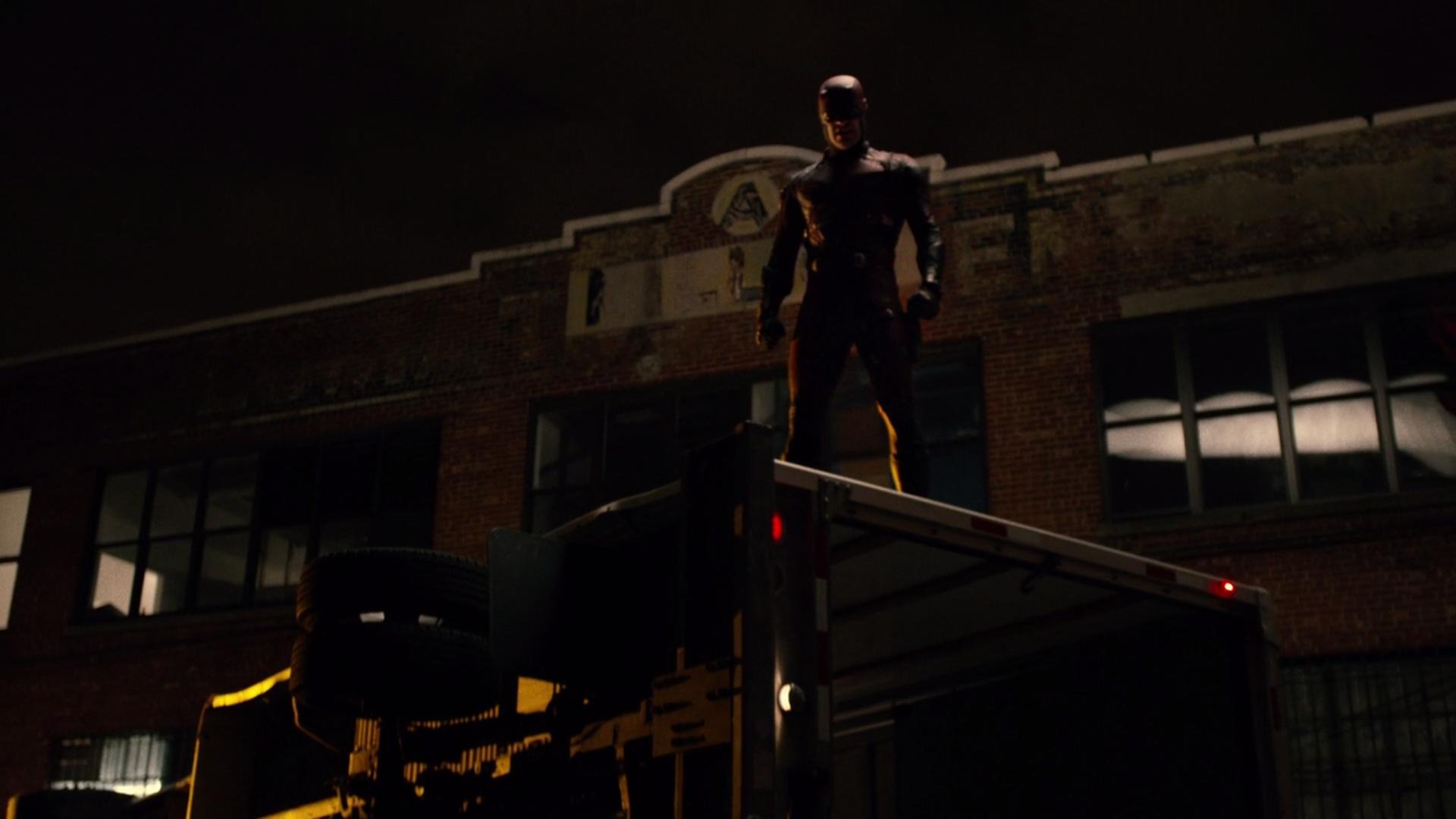 One of the biggest criticisms thrown at the Netflix properties in the MCU is that they ultimately don’t feel like they’re connected to the rest of the films and shows. There’s only one real mention of the rest of the world here and it’s when they bring up the alien invasion from The Avengers. However, there are TV connections. For one, Roxxon is part of a case Nelson and Murdock work and they’re in all sorts of MCU properties, while playing a major role in Cloak and Dagger. It’s actually being unhappy with Roxxon as a client that causes Nelson and Murdock to go out on their own. There's also the story of Matt’s father, who was murdered after a boxing fight he refused to throw. His opponent was Carl “Crusher” Creel, who appeared in Agents of S.H.I.E.L.D. as the Absorbing Man. 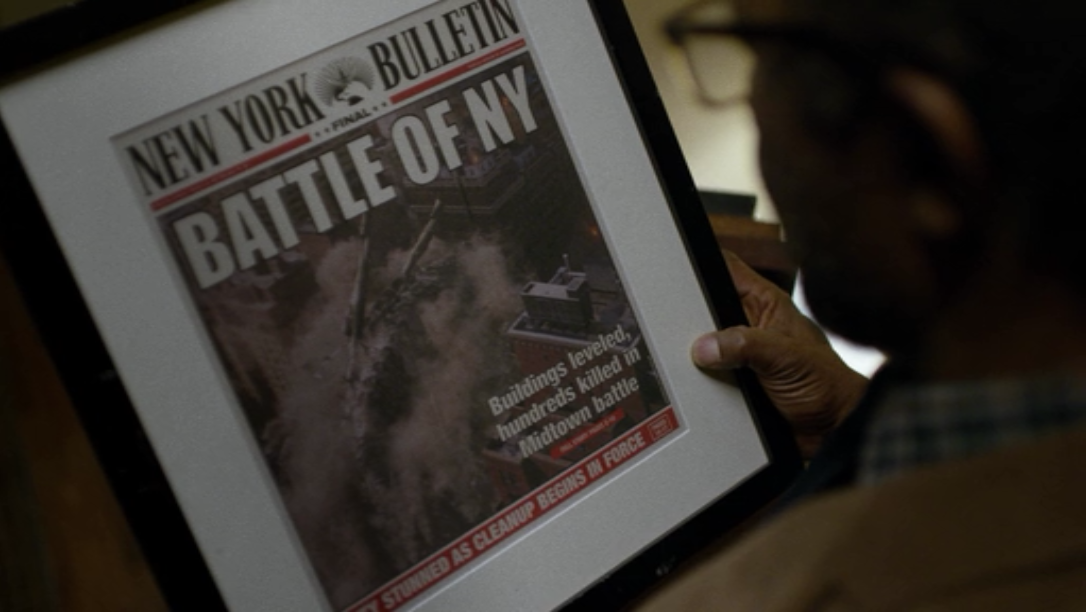 My biggest gripe with this show was the length. Thirteen episodes is usually a good number for a series and it mostly worked here. That being said, the show seems to reach a boiling point around the ninth episode. Following that, things slow down a fair amount before picking up for the final few episodes. Maybe even shortening things by just one episode would’ve helped the pace. Either way, this was a tremendous start for the Netflix run of shows. Daredevil ruled.