Tony Stark's adventures as Iron Man continue, while we get introduced to Black Widow

Iron Man was the first official release of the Marvel Cinematic Universe and it was followed about a month later by The Incredible Hulk. However, the next three movies released all kind of overlap with each other. It’s all part of “Fury’s Big Week,” which also sees Captain America awaken from being frozen for over 70 years. To best choose which movie to watch next, a little research showed that most of the events of Iron Man 2 happen before the other ones, so this is up next.

It’s crazy to think about where the MCU has gone when you consider some of the early issues. Two major characters were recast after just one film. One of those is James Rhodes, who becomes War Machine in Iron Man 2. Terrence Howard played him in the first installment, and while he looks more like what I expect Rhodes to look like, Don Cheadle is an improvement. He’s a great actor. There’s a scene where he talks to Tony, who is going through emotional problems, is a highlight. There’s more chemistry in that one moment between them than Howard and Robert Downy Jr. ever had together and it continued throughout the film and into the later ones. 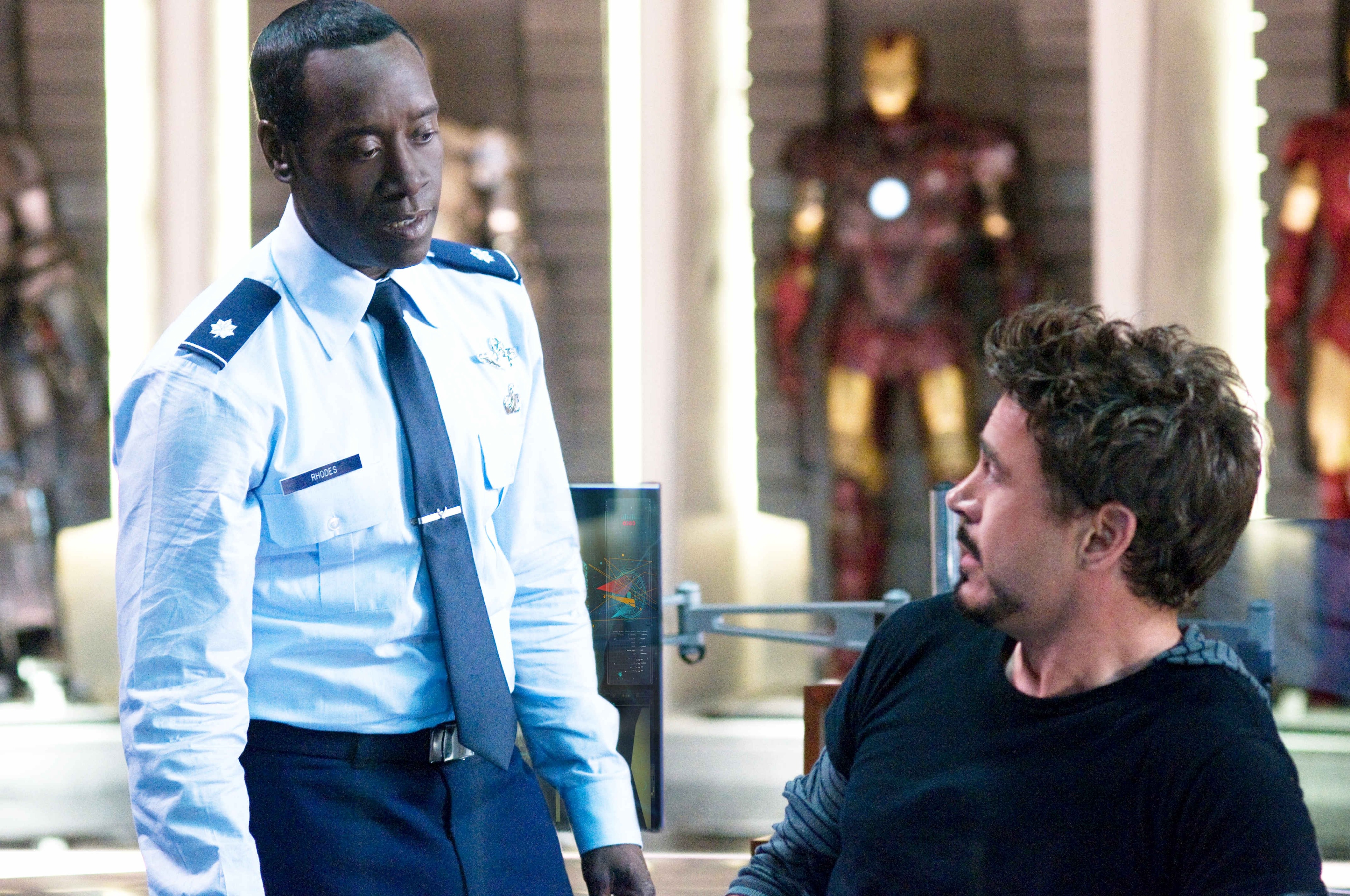 Speaking of Tony’s emotional problems, they are easily the best thing about this movie. Tony realizes that he’s dying due to complications from the arc reactor in his chest. Seeing him drunkenly party in his suit and eat donuts while sitting in a giant donut made for entertaining stuff. There’s a famous story of Tony Stark battling alcoholism. On the extras from the Iron Man Blu-Ray, they discuss it and mention that alcoholism was the villain in that tale. I think they should’ve gone that route here. Build the story more around this idea. Tony could lose a fight to an army of drones or whatever because he’s drunk. It takes encouragement from Pepper, S.H.I.E.L.D., and Rhodes to overcome it, before a sober Tony and War Machine wreck stuff to end the film. To me, that would’ve been better. 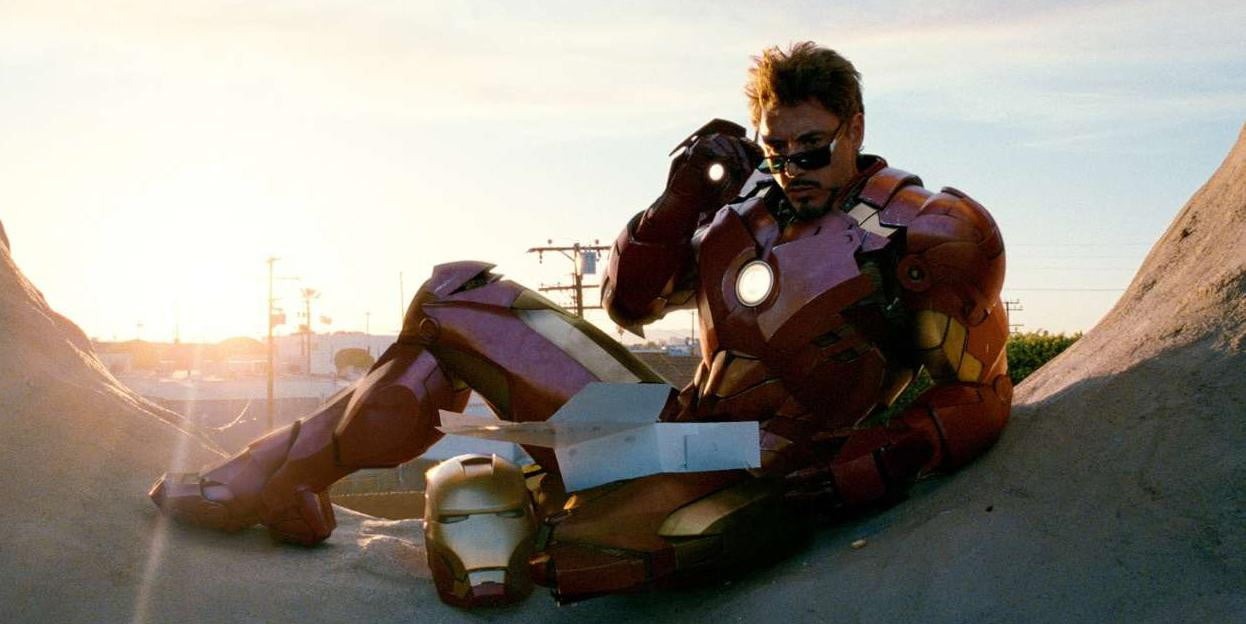 Part of the reason I say that is because the actual villains we get in this are pretty lackluster. After a stellar performance in 2009’s The Wrestler, this was supposed to be the big blockbuster movie to send Mikey Rourke (Ivan Vanko) back into stardom. Instead, he speaks in a bad Russian accent and doesn’t seem to care much. On the flip side, Sam Rockwell does his best as Justin Hammer. The problem is that Hammer is made to be the biggest joke ever. He’s kind of a rival in the technology game to Tony, yet is totally incompetent. It’s okay to have Tony treat him like a joke, because that’s who Tony is. With everyone though, he just seems like a loser in each scene, so we never see him as a threat. Both rank near the bottom in terms of MCU villains.

A simple look at the famous racetrack scene shows how I feel about this movie. The good and the bad. The good is that the scene is cool and visually, it's a delight. The effects work well and, at least for a little while, Ivan comes across as a viable threat. Tony’s briefcase suit up is one of the coolest variations he’s ever done of it. His newer ways of putting on the suit are easier and probably cooler, but this is an underrated one. On the other hand, to get to this scene is odd. Tony didn’t plan to go out and race until the last minute, so Ivan’s plan comes across as kind of forced. Also, Tony does away with him quite easily once he puts the suit on. It takes away from him being an intimidating villain and proves Tony’s stance in court right. Nobody can make the suits like he can. Ivan did a version, but it wasn’t in Tony’s league.

I also wanted to touch upon some of the cameos throughout. While cameos are nothing new or uncommon in the MCU, this movie seemed to go overboard with it. Olivia Munn and Kate Mara both make the tiniest of appearances, for no other reason than to get a reaction from the audience. There's also a weird Elon Musk appearance. The Stan Lee cameo this time around plays off the one from the prior film. There, Tony mistakes Stan for Hugh Hefner. This go around, he mistakes him for Larry King. It’s mildly amusing.

While this is ultimately a mostly forgettable entry into the MCU, there is one thing that stands out above everything else. The debut of Scarlett Johansson as Natasha Romanoff/Black Widow. It’s interesting to see her flirt with Tony a fair amount at the start, considering she goes on to flirt a lot with Cap and Bruce Banner. Once we find out that she is an undercover S.H.I.E.L.D. agent, it feels right. She becomes a consistent highlight throughout the film. Each scene she’s in feels like it matters and her hallway battle is one of the coolest intro fights of any character in the MCU. She has no true superpowers, but she went on to play a more pivotal role than most ever expected in the series and it’s cool to see her beginnings. Scarlett is great in the role and she’s become a favorite of mine.

I feel like there was a lot of potential in this movie, only for it to get bogged down by the villains and some of the plot points. Had they focused on Tony’s drinking, which was a high point for the movie, I think it would’ve worked better. Those scenes, Don Cheadle, Downy being great again, and everything involving Natasha Romanoff were strong. Mostly everything else is either completely forgettable or just not that engaging.