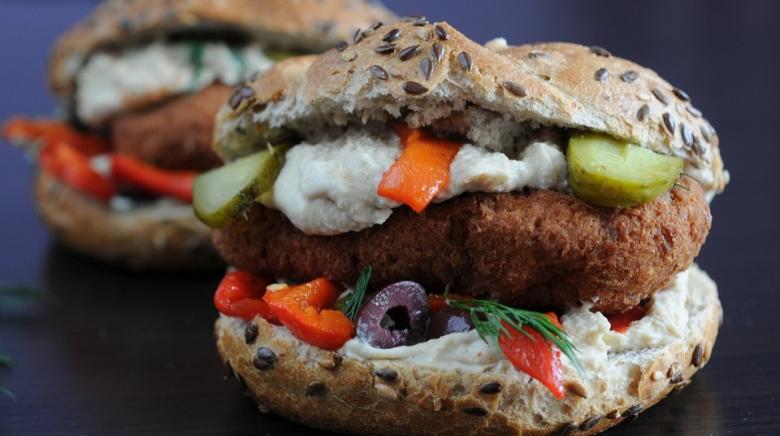 I bet you didn’t know that it is possible for a vegan to eat a big, juicy hamburger but without the meat.

A nutritious meatless patty such as the “Impossible Burger” sandwiched in between two whole-grain buns is just as fulfilling as the traditional one.

It includes wheat protein, coconut oil and potato protein, some of the many vegan products on the market booming in sales.

Ultimately, we live in an era today where there is a greater demand in innovative plant-based food options.

There is also a correlating trend of more and more people who are becoming vegan.

According to a scholarly journal, “The Health Advantage of a Vegan Diet: Exploring the Gut Microbiota Connection,” the best quality diet is a vegan diet.

As Wang was once a die-hard carnivore and now a vegan enthusiast, she never would have thought her Chinese roots could live without meat.

“Veganism taught me more about the world of fruits and vegetables, which is fascinating,” she said. “True plant-based foods are delicious, flavorful and colorful.”

Katherine Platz, a 21-year-old college senior at New York University, shares a similar opinion about the fresh and healthy cuisine.

Besides the looks of it, the newly five-month vegan feels better about what she eats both physically and morally.

“I don’t miss eating meat at all,” she said.

Platz first gave up dairy before she immersed herself in the plant-based lifestyle.

Due to her recent development of lactose intolerance about six months before becoming vegan, the removal of milk products from her diet was necessary.

“Giving up dairy was much easier than I’d imagined,” she said. “Then I read the book ‘Eating Animals’ and decided to go full vegan.”

Vegans are individuals who adopt an animal cruelty-free diet and, overall, lifestyle.

To avoid foods such as dairy and eggs, as well as clothing made from animal skins and furs, are all part of the pledge.

According to The Nielson Company, consumers are buying plant-based substitutes more rather than the traditional vegan staples like tofu, brown rice and granola.

“I love vegan mac and cheese, Ben & Jerry’s non-dairy ice cream and anything with chickpeas in it, especially hummus,” she said.

Nutritious food swaps make it easier to transition to a vegan lifestyle instead of a person cutting out their favorite non-vegan foods from their diet.

Or perhaps slowly removing animal products from everyday meals can also be a strategy to tip-toe your way into veganism.

Veganism comes in several different forms as there are raw vegans, junk food vegans, healthy vegans and those in between who balances all three.

Within this subgroup, they ensure a balanced diet of fruits, vegetables, legumes and whole grains that fulfills their nutritional needs.

This is the core description of a true vegan and what being vegan is all about as they embrace the versatility of the earth’s vegetation.

However, at first glance, Platz didn’t think adopting a plant-based diet was possible.

“I thought the lifestyle would be too complicated,” she said. “I didn’t believe I would have the self-control or resources for it.”

However, she was proven wrong. Despite the negatively attached public perceptions on vegan culture, she found it to be easier over time.

“Much easier over time,” she said. “When planning my meals, I automatically think of vegan things to eat.”

The search for vegan options outside of her usual home cooked meals when she first transitioned shockingly did not turn out to be a scavenger hunt.

“It surprised me that you can find a vegan option in almost every restaurant,” she said.

And you can find vegan options in almost every grocery store as well.

In this healthy revolution, it seems like no food items are left behind when it comes to the wonderful innovation of plant-based products.

Go to your local grocery store and you will see its various options sharing the shelves of their traditional animal-based counterparts.

According to a Nielson Homescan survey, 39 percent of Americans are actively trying to eat more plant-based foods.

Only 3 percent are following a strict vegan diet.

Within this small percentage, most of the vegan community are young and diverse individuals who tend to, Platz believes, reflect unique styles.

“I think there are two sides of the vegan community: hipster-outdoorsy types and trendy- urban-wealthy types,” she said.

Either way, the identity of a vegan is not confined with the stereotypical hippie based on public rumors, but Platz thought otherwise.

“I thought vegans were high maintenance and idealists,” she said.

Veganism also umbrellas a diverse multitude, where not only Caucasian millennials are enjoying the vegan life.

According to Al Día News, Latino millennials are challenging family food traditions as there is a growing trend in their culture embracing vegan food.

Yaneli Gonzalez, a college senior at SJSU, is the only Latina in her family to commit to the vegan pledge.

“My family didn’t understand it,” she said.

Both of Gonzalez’s parents were worried when she told them she was going vegan.

They thought it was limiting, but her mother, Maria Gonzalez, grew to accept it as Gonzalez’s vegan choices are now influencing her mother’s diet.

She is trying to incorporate more vegetables when she cooks and consume less meat to kick-start her health streak.

On the other hand, Gonzalez’s father, José Gonzalez, is more difficult to grasp the “I can live without meat and dairy” concept.

“My dad, to this day, acts like it goes against his morals because he grew up drinking cow’s milk,” she said.

Raised on a ranch in Mexico, meat and milk were sustainable food sources and means of income that were depended on for his survival.

A cow symbolized protein and profit in his upbringing, not an animal detrimental to one’s health, though in Gonzalez’s eyes is exactly what she sees.

“We would butt heads about it,” she said. “Now, I don’t argue with people who are closed-minded.”

But her loved ones’ opinions did not stop her where it has been close to three years of being a proud vegan.

During spring break, a spark of curiosity in the origins of her food led her down a rabbit hole of binge-watching documentaries on food production.

She watched a lot about the dairy and meat industry and discovered the animal horrors that happened behind these closed factory farm doors.

“I was just heartbroken, and it was like an awakening for me,” she said. “I couldn’t even eat my ham sandwich anymore.”

The gruesome activity that she witnessed on her laptop screen was captured by people who went undercover in these factory farms.

“I have to give a lot of props to the people who know the truth,” Gonzalez said.

And these animals wind up on our plates.

According to PETA, livestock are crammed by thousands into tiny spaces as the factory farming industry strives to maximize output while minimizing costs.

Also, all farm animals are injected antibiotics for plumping. The more meat on the bone, the more money these factory farm corporations earn.

According to Business Insider, these growth-promoting drugs are filled with testosterone, estrogen and progesterone which in turn is ingested in our bodies.

“We are eating those hormones,” Gonzalez said.

But the most common side effect that dairy lovers experience is lactose intolerance, which Gonzalez suffered from in her pre-vegan days.

“I used to drink a lot of milk — the 2 percent ones from Costco — but I always thought I had digestive problems,” she said.

Bloating and constipation disappeared once she cleansed her body from the first week of consuming a vegan diet.

Not to mention, Gonzalez loves animals, for this is another reason why she made the switch.

Passionate about the lives of cows and chickens is part of her motivation to remain vegan as she does not look at meat the same.

“I think the core value of every vegan is to love and care for animals, not just human beings,” she said.

Gonzalez is not only protecting her body from health issues, but she is also rejecting the unjust business of the meat and dairy industries.

The importance of meat is so ingrained in our culture, we have adopted the notion in which it is an essential part of our diets.

Most of the United States is oblivious to how their Western diet affects not only their bodies, but also the earth.

A high demand in animal products weighs a heavy toll on the environment as Alyssa Joyce, 22, became vegan for environmental and ethical reasons.

“It’s particularly harmful to the environment in how we farm,” she said.

According to the scholarly journal article, “Beef substitutes and environmental sustainability,” protein contributes to 50 percent of greenhouse gas emissions.

For a little over two years, Joyce has been satisfied with her choice in helping the earth, while also saving some money as well.

Spending less on groceries for plant-based meals was one perk she experienced when she became vegan.

Joyce changed her life around not from her own desire to do so, but from a friend who encouraged her to try the vegan lifestyle.

But only for a week.

As a birthday present, she received an email that included vegan recipes explaining the 7-day vegan trial run.

A small taste of the vegan lifestyle was enough to convert the Art History major into a full-fledged vegan.

“I don’t feel limited at all,” she said. “It is just as varied and interesting as any other diet.”

However, omnivores can disagree with this statement.

Converting those to a plant-based diet is a challenge because of dietary habits, taste and psychological associations when eating animal products.

And sometimes, it is simply the way people perceive vegans as the stereotypical weird activists who eat rabbit food and fight for animal rights.

This is not true for all vegans.

There is a stigma attached to and challenges that come with being vegan, where Joyce shares the difficulty in explaining her reasons for choosing veganism.

And how others may receive it in a condescending manner.

As for Gonzalez, she sometimes deals with negative comments and behavior regarding her choice in lifestyle.

“Jokes from my family about me living a healthier lifestyle sometimes get to me and I lost friends who questioned my choices,” she said.

As a vegan, Gonzalez has become more docile and understanding of other non-vegans because she was once in their shoes.

“By showing and sharing people vegan recipes is the easier route because it brings up a better conversation,” she said. “All cultures bond over food.”

This is exactly what people are doing through social media which is why veganism has become so mainstream.

A bunch of online recipes, mobile apps and YouTube videos are out there influencing and helping individuals who want to transition.

Even the traditional way of people socializing with each other is how non-vegan eater’s lives are being touched.

Because of trends like veganism, we live in a new age of breaking cultural traditions and Gonzalez could not agree more.

“I believe change is happening,” she said.